How to Become the Perfect Girlfriend

Do you want to become a perfect girlfriend but are completely clueless about how to hit the bull’s eye? Well, keep your worries at bay. I am writing this article just for you.

Perfection is a classic illusion but somehow, we all crave for it, day in and day out. Would I care to share my verdict? Oh, well! Why not? I guess there’s nothing wrong with challenging yourself and getting better emotionally, physically and spiritually as each day makes its way through our lives.

What I explained above is a generalised version of perfection. We shall talk about a different form of perfection today, which being the one aimed at transforming you into one of the most desirable women whom every man would want to date.

Being in a relationship isn’t all fun and games, as it appears to be if you look at it from a surficial level. It requires efforts from the parties at both ends. Some work needs to be done to rekindle the spark in the soul and keep it ignited forever if you want it to be a “forever” thing.

It depends on whether you love him or are just keeping things casual. If you really love him, you’ll leave no stone unturned to impress him even if it means working a little harder to act better, look better and be happier as a whole. I opine it’s a win-win situation because at the end of it, you’ll get to see an improvised version of yourself apart from getting all the love and attention that you are worthy of.

I’m done with the banter for now. Are you all set to get the title of the “perfect girlfriend”? If yes is your answer, then let’s not waste any second. Here’s the list of 10 things I’ve compiled so as to assist you on your journey of being the perfect girlfriend.

1. Shower Him with Love 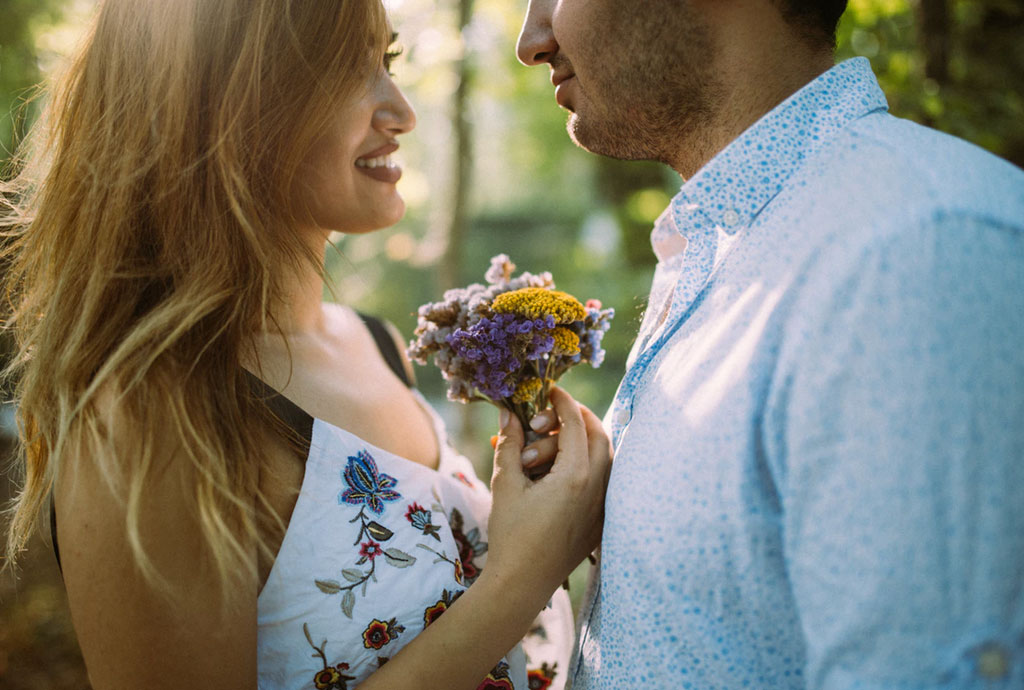 Perfection isn’t all about looks. It lies in the beauty and the compassion that your heart beholds. A perfect girlfriend would give him all the love that he could ask for, and sometimes, even more. This tops the girlfriend’s duties’ list.

Love him. Let him know that you have his back and you’ll defend him in case any unfavorable circumstance arises. Show little gestures of kindness, like offering him a massage when he returns from work feeling exhausted and worn out. Prepare a cup of tea. Play his favorite music even if you don’t like it.

Kiss. Snuggle. Give him the little dosages of those adorable ” I love you” when he least expects to hear it from you. Make him feel special.

At the end of the day, you’ll succeed at impressing him and at the same time, at raising your own status whilst attempting to be the perfect girlfriend.

We all have insecurities but I wish we had a concealer to hide them as well. Unfortunately, our insecurities make us fall in the category of the “undateable” if we bring them out in the open much more than is needed.

Asking if you have an asymmetrical face or if your belly fat is visible for a gazillion of times every day is extremely unattractive.

He’ll not be able to love you if you constantly push him away with your lack of self-love.

Include a little session of “pep talk” in your morning ritual and tell yourself repetitively that you are beautiful. To make it even better, play the James Blunt single “You’re Beautiful” in the background. Doing this will keep you feeling awesome all throughout the day.

You’ll radiate the vibes of confidence and happiness, and he will get drawn towards you simply by looking at the way you adore and admire yourself.

And in the long run, he’ll love you even harder.

Give him little gifts having high emotional value as a memento of your love. Do the things that other women would rarely be seen doing. While coming up with the ideas about a perfect gift, try to picture out of the box. Awesome ideas often lie elsewhere.

A session of massage would work its magic. Even a candle light dinner with a bottle of Sangria would appear to be quite appealing. Tell him that you love him. Buy tickets leading to some sort of adventurous voyages. Assemble memories and moments of togetherness.

Embrace him and make him feel special. His heart will flood out of love for you and he’ll reciprocate the same gesture sooner or later.

4. Be Appreciative of Him

Appreciation is a gesture of kindness. Refrain from being a complain-box and stop complaining about even the pettiest of the stuff.

We are humans and we are flawed. We all are subjected to making mistakes. But our mistakes don’t overshadow our good work and all the endeavor we put in to make people around us happy.

Remember the moments of joy that he gave you. Treasure those moments. Thank him for all his sweet gestures and tell him that you appreciate it.

What does a guy want to hear from his girlfriend?

On the contrary, if you keep sounding miserable, he’ll think of himself as a failure and the relationship would turn downhill.

So, beware from all the wrong-doings. Appreciate him instead!

5. Concentrate on Your Life

Falling in love feels like the best thing ever. We often lose our independence and depend wholly on our partner for all the emotional and financial support. This would work fine for a while. But life is uncertain and so are its events.

You might be in love today. You might fall out of it the other day. In either of the ways, your life will be devoid of everything. You’ll have nothing and no one to resort to if you don’t concentrate on building your own life and giving a shape to your career now.

Relationship and career can proceed simultaneously. You don’t need to sacrifice one for the other.

Work hard to maintain your “Miss Independent” image because that screams of elegance. He’ll drool harder if you keep that image intact and eventually, you’ll end up being the best one ever for him.

6. Give Him Enough Space

Any perfect girlfriend would give her guy an ample amount of space. Comprehend it well.

He wouldn’t want to see 10000 missed calls from your number when he steps out of the house for a few hours. He has a life, too, and there are other people in the list of his priorities that he needs to keep up with.

Don’t act like a psycho and drop by to check on him when he is hanging out with his friends. Trust me, it’s a major turn-off. And who knows? If you continue doing so, he might even run away someday.

Instead, apply the opposite trick. Give him a lot of space. Make him miss you by not texting or calling him when he is out and about with his friends or family. Wait for a while before he comes chasing you just to tell you that he missed you and that you are the perfect part of his life.

7. Never Take Him for Granted

Let me give you a reality check. Nothing comes for granted, yes, nothing really does.

Never ever stop giving him the attention that he needs from his girlfriend – that’s you! If you don’t appreciate him or make him feel loved, or show the acts of kindness and love towards him, he’ll end up feeling worthless.

Just to fill the void in his heart, he’ll seek the comfort in someone else to fulfill his unfulfilled desires.

To cut to the chase, karma will slap you back and you’ll be one who’ll feel neglected and taken for granted at the end of it.

The world is a nasty place. You never know who might be eyeing on him to steal him from you when you’re not paying enough attention.

However, if you save him from drifting apart, everything will remain the same and he’ll continue being yours forever and always. Just before you, you’ll hold the prestigious title of being the perfect girlfriend.

The secret to having a better skin and appealing physical features is by working out on a regular basis. Your guy will swarm over your worked out body when you put in an effort to have a perfect beach body.

In order to be the perfect girlfriend, it’s important for you to stay in shape. A sexy physique is highly seductive. He’ll never let you get out of his field of vision if you have a sexy body.

Every time he looks at you, he’ll fall even harder and will label you as a perfect girlfriend he’s ever had. Wow! Sounds good, doesn’t it?

9. Make an Effort to Get along with His Friends

He may have a few stupid, arrogant and doltish people as his best friends but there’s nothing you could do to change that fact. He met them before meeting you and they’ve been with him for much longer than you can imagine.

So, just to please him, try to like his friends too. Friends form an integral part of our lives and I, on a personal level, wouldn’t date someone who didn’t have a sense of respect towards my friends.

Yes, some might not appear to be the ones who you would want him to hang out with, but he’s an adult. YOU can’t tell him who to befriend or who not to. You’re his girlfriend, not his grandmother!

Therefore, move along and respect his choices. Hang out with his friends if he invites you to do so. If not, listen to him attentively whilst he brags and rants about them. It’ll indicate that you respect his pals and in return, you’ll end up receiving all the respect and the coveted title of the perfect girlfriend.

10. Don’t Give Him Reasons to Be Jealous

A tiny trace of jealousy is playful but truth be told, men don’t enjoy wriggling in the path of jealousy.

So, if you want to be perfect, try not to make him jealous. Instead, make him feel loved even when you’re around other men.

Don’t flirt with other men. Let him know that he is the one for you and you love no one else but him.

Make him feel that you can be trusted by being attentive towards him, even if you’re in the limelight and you’re getting a lot of attention from other men.

One way to stop making him feel jealous is by avoiding the feelings of jealousy or mistrust at times when he is the center of attraction. Only then he’ll develop a sense of security regarding the relationship and so will you.

I hope this worked out to be the perfect guide in placing you in a secure position when it comes to the partnership between you and him. At the end of it, I believe you’ll get a better insight on all the know-hows of being the perfect girlfriend for him, who he’d want to store in his eyes and heart till eternity.

I hope you had a good read. Take care, you, perfect girlfriend!